From Pacific Workplaces:  While economists argue over whether opportunity zones can effectively transform our cities, we appreciate the idea of supporting local entrepreneurs – this is what we do!  As an operator of flexible offices and coworking places, we support startups and new businesses through member events that facilitate connections, along with offering affordable workspace solutions to accelerate business growth and make work better.

Opportunity zones were created to spur development in distressed neighborhoods, but developers in some areas are struggling to find tenants for their new properties. Their savior may be another rising trend in commercial real estate: coworking.

Lured by the lower cost of shared office space, startups also gain access to a network of eager investors looking for companies to back, a combination that is helping to create incubators in underserved markets.

The former General Electric campus in Fort Wayne, Indiana, a long-planned development called Electric Works, sits in an opportunity zone. The project encompasses 2.7 million square feet, and co-working is expected to account for more than 72,000 square feet of that space.

The project’s coworking component — available month to month to companies with up to 15 employees — is a key part of an attempt to draw the surrounding community into what its backers say will be an innovation hub in the city.

“There’s a lot of interesting stuff happening around Fort Wayne, but it was all happening within silos,” said Jeff Kingsbury, chief connectivity officer at Ancora, a private real estate firm based in Durham, North Carolina, that is backing Electric Works. “By creating that kind of center of gravity, we achieve a density, coupled with amenities, that really helps to draw innovation.” 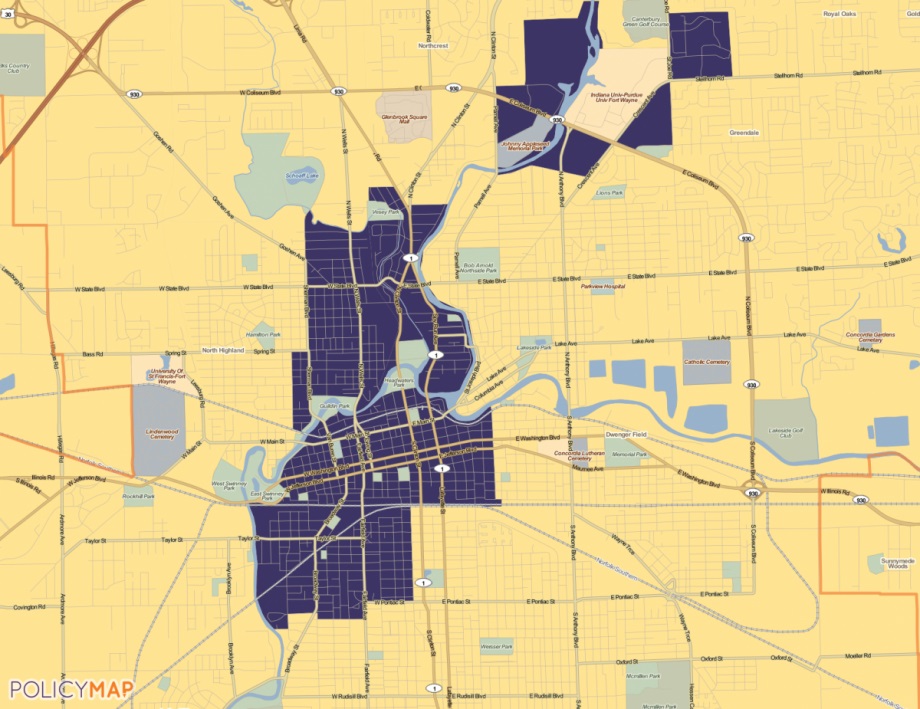 Construction on Electric Works is scheduled to start in the first quarter of 2020, and is expected to take at least 18 months. The coworking component echoes a larger trend that is drawing more entrepreneurs to opportunity zones.

The opportunity zone program, enacted as part of the federal tax overhaul in December 2017, was created to stimulate private investment in economically distressed communities in exchange for a break on the capital gains tax. There are now more than 8,700 such zones nationwide.

One of the biggest challenges, however, is finding businesses to move into opportunity zones.

Coworking spaces are a natural draw to opportunity zones

Coworking spaces entice startups and established companies looking for short-term, flexible office space. Marry the investment via the zones with such entrepreneurial spirit, and the coworking spaces can help incubate the economic turnaround the distressed areas need.

“This is where the innovation is going and where new ideas are percolating about how to actually participate as part of your community,” said Brandon Litman, chief executive and a co-founder of Kindly, a 2-year-old startup that matches people with volunteering opportunities. It has a coworking office in an opportunity zone in Newark, New Jersey.

“When you’re in an opportunity zone, you feel a bit of ownership for the success of that region,” Litman said.

Vignesh Krishnan, founder and chief executive of SampleChain, an 11-month-old company specializing in combating market survey fraud, said he was drawn to an opportunity zone in downtown New Orleans because it put him alongside similar entrepreneurs. It also opened up possible investment avenues that otherwise might not have been available to a small startup in a city not known for its access to venture capital.

The ability to network is an enormous appeal of coworking in opportunity zones, proponents say. 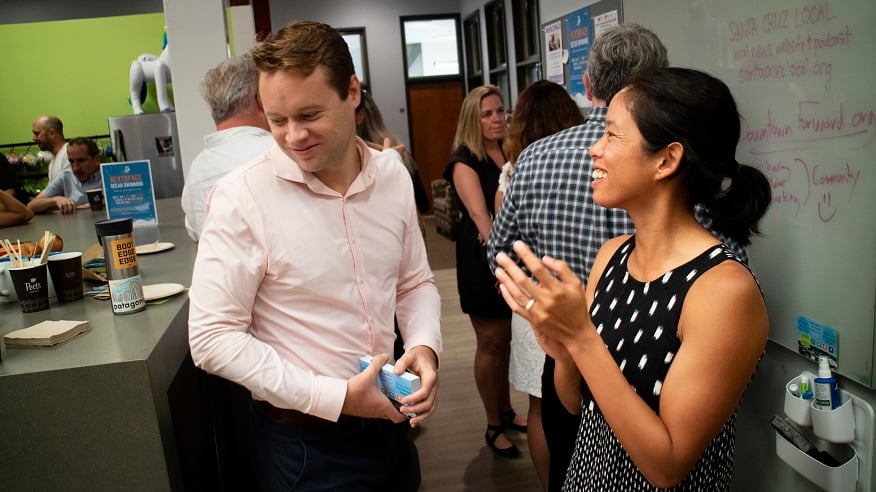 Most of the zones are beyond traditional startup stables such as Boston, New York and San Francisco, and they help entrepreneurs find investors without having to relocate to those cities, said John Philipchuck, the chief investment officer at Ancora.

The potential is drawing coworking companies and outside investors

Launch Pad, a 10-year-old coworking operator in New Orleans, is raising an opportunity zone-focused venture fund to invest in companies in those zones, including in firms that might not be leasing space from Launch Pad.

“Our thesis is that there is a lack of investment capital coming into these markets,” said Anne Driscoll, Launch Pad’s president and chief operating officer.

Despite the benefits, developers are facing pushback. Critics of opportunity zones say that the development of apartments or hotels in those areas will drive up housing costs and land prices, in turn driving out residents.

But coworking in opportunity zones will foster the sort of office development that will draw in residents, rather than them push out, said Mark Kennedy, chief investment officer for Fuel-QOZ, a fund that focuses on real estate, technology and opportunity zones.

“Traditional real estate development in these zones will do nothing but accelerate gentrification,” Kennedy said.

Kennedy and others say that office development, and coworking in particular, will attract companies with the potential to expand through the investments that the zones themselves help draw.

“We think you’re going to get a lot more benefit for the city and a lot better return for the investors if you do office” development, said Clint Myers, a partner at Rise of the Rest, a $150 million fund focusing in part on opportunity zones. “You’re going to see outsize demand — from coworking, from startups, even from mid-size companies that are looking to grow.”

Rise of the Rest was set up as a seed fund for Revolution, the investment firm led by Steve Case, the former America Online chairman. J.D. Vance, author of the best-selling memoir “Hillbilly Elegy” and a Silicon Valley investor, manages the fund.

Myers said that Rise of the Rest had been in contact with coworking companies such as Launch Pad and Beauty Shoppe in Pittsburgh about taking space in its planned opportunity zone developments. And it is also looking to invest in startups that are looking for these coworking spaces. “We are certainly talking to companies in their early stages,” Myers said.

It’s a long game, though, Myers and others admit. Given the decadelong hold that opportunity zone investments require, it will take time to see whether the returns for investors and the communities materialize.

“We are very much hypothesizing, and I think we need to see more activity,” said Jonathan Paine, head of opportunity zone development at Jones Lang LaSalle, a real estate services firm. 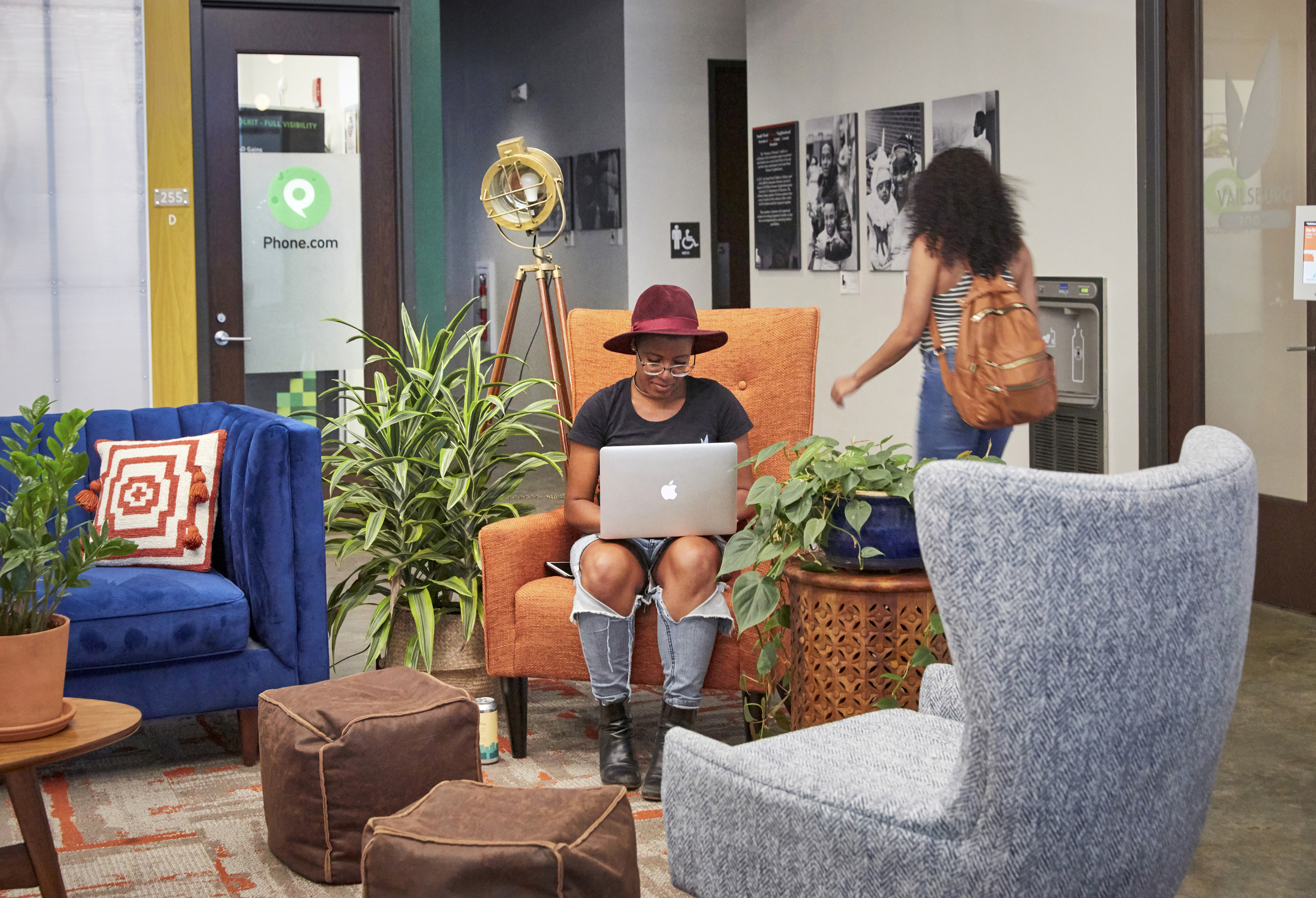 A location for Launch Pad, a 10-year-old coworking operator, in Newark, N.J. The combination of opportunity zones and shared office space is creating incubators of start-ups and investors in underserved markets. (John Muggenborg/The New York Times)

Coworking operators accounted for more than 10.1 million square feet of office leasing activity nationally during the first six months of 2019, behind only the technology sector and ahead of industries such as finance, health care and law, according to JLL.

Larger, more established companies such as IBM and UBS have increasingly started to fill some of that space. Backers of coworking in opportunity zones see that trend as another potential driver. Where better for these bigger firms to test ideas and draw fresh brainpower?

Looking to join a coworking community?  Find a Pacific Workplaces location near you.