A couple of weeks ago, we were honored by the visit of the Mayor of San Jose, Sam Liccardo, at NextSpace San Jose. The purpose of his after-hours visit on a Wednesday evening was to explain his positions on a number of issues faced by the city of San Jose and to meet with citizens and entrepreneurs connected to our coworking space. We would like to share some aspects of the rich discussion we had with the Mayor.

The event was organized by Julie Kodama, NextSpace San Jose Community Manager. Teresa and Sergio from Angelou’s fed us with flavorful Tacos and chips. Nathan from Nox Cookies brought (you guessed it!) delicious cookies. Allen from Camino Brewing shared a case of slightly caffeinated beer to keep our minds alert for the Mayor’s speech. We were all so grateful for their generous contributions.

Thirty-five people joined the event, including many guests not immediately related to NextSpace. The audience included a wide diversity of backgrounds and interests, ranging from high-tech to non-profit, entrepreneurs, artists, concerned parents, and more.

One of the highlights of the evening was when Isabel, the 8-year old daughter of one of our former members, gave Mayor Liccardo a handwritten letter, thanking him for being a great mayor and saying that she loves San Jose. Very sweet! 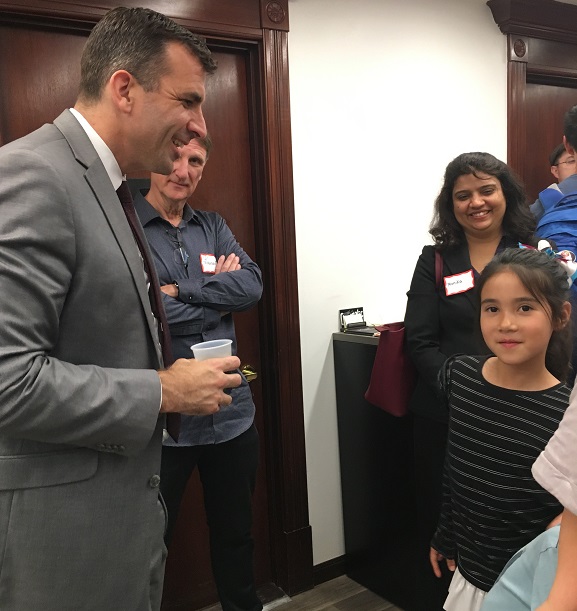 One early topic of discussion was the rising cost of housing in the city of San Jose. Many in the audience voiced their concerns with steep rent increases and asked why the city could not have broader and stronger rent control, a recurring topic of discussion throughout Silicon Valley.

We were extremely impressed by the educational job the Mayor did with his response, highlighting the potential pitfalls of rent control. Overdoing it would achieve a counter-productive result he pointed out, as new developments would not pencil out financially, “so let’s be careful on how to approach the problem” he added, while stressing how critical of a goal it was to contain housing costs in the city and to provide affordable housing solutions.

Mayor Liccardo explained that his priority is with high density residential developments in a vibrant downtown environment. “I need more cranes downtown” he said, to make a point that we need more vertical residential developments in the heart of the city, highlighting the many benefits of this approach, including reduced commute time, increased usage of public transportation, and an ever more vibrant and appealing downtown. In that respect, Measure 3, which will be on the ballot of the June elections, will help fund BART extension to San Jose, if passed, and create an entire new dynamic to the city, along with the 20,000 jobs Google is planning to move to downtown.

Conversely, the Mayor developed well thought-out arguments on his opposition to large developments of high-end single homes in South San Jose, which in the end would cost the city dearly in terms of providing city services to remote locations, increasing traffic, while not really helping the inventory of affordable housing in the city for seniors, in spite of the claims made by the residential developers that are pushing for it. That is why he argued to vote No on Measure B and Yes on Measure C on the June ballot.

The mayor explained the value proposition of the Microhousing experiment he supports, which seems like a good way to provide affordable housing and help get people off the street. Megan Colvard, Regional Director of PATH, who was present in the audience, approved. His main argument to people opposed to a microhousing project in their neighborhood was this: “Do you want the homeless in your neighborhood out on your streets or inside a micro-home.”  That seemed to make a lot of sense to us. 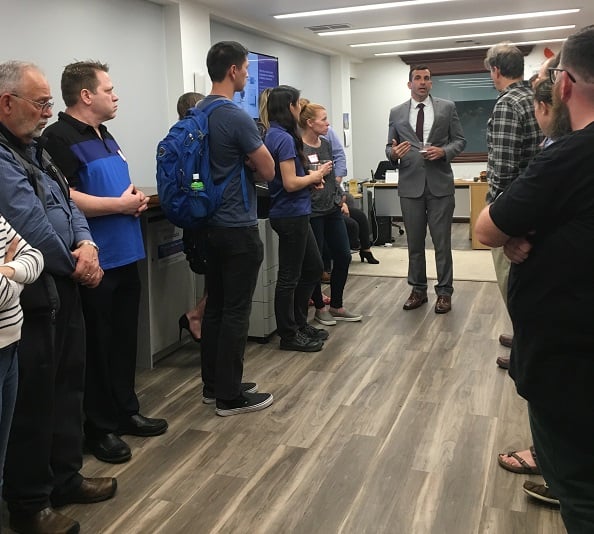 A lively discussion on how to promote art in San Jose took place. In the audience we could spot Mighty Mike Mcgee, our local slam Poet Laureate who has won multiple local, national, and international poetry competitions. An impromptu brainstorming session initiated by Dave Yale, a NextSpace San Jose member and furniture designer, and Laurent Dhollande, our CEO, took place on the topic of branding the city of San Jose. Paris is branded by the Eiffel Tower, San Francisco by the Golden Gate. That kind of iconic branding is missing in San Jose. We’d like to engage all creative parties to contribute their ideas. To be continued…

Finally, Mayor Liccardo reiterated his affection for and personal commitment to the entrepreneurship ecosystem NextSpace promotes in San Jose. He recalled fondly his first visit to our facility for the 2011 NextSpace Grand Opening while he was the downtown City Council member.  That personal commitment came through again when Allen of Camino Brewing explained the difficulties he had experienced with the city on permit issues (now resolved). The Mayor immediately volunteered to be present at the new Micro-Brewery Grand Opening this month, even though Allen’s request for mayor participation at the event had been previously turned down by city staffers. In this case we were able to facilitate Allen’s connection with the Mayor…. and we are thrilled with the result! Amazing things do indeed happen at NextSpace San Jose!

Soon after the event Mayor Sam Liccardo sent a very sweet handwritten note to Julie, our NextSpace Community manager. The last paragraph read “Julie, please let me know how we can help support the entrepreneurs and innovators in SJ’s NextSpace Community – We’re proud to have you in our Downtown. Cheers! Sam”

You can bet that we will soon follow up with Nate Donato Weinstein of the San Jose Office of Economic Development, also present at the event, to engage him with new initiatives for San Jose entrepreneurs. Don’t hesitate to volunteer your thoughts and stay tuned!