The Gilded Age of Renting: Let’s Subscribe to That Sofa

From Pacific Workplaces: The era of ‘Renting’ is in full swing as this New York Times article shows how folks today prefer to rent everything from office and coworking space to clothes and furniture.

Many young American urbanites have resigned themselves to a life of non-ownership, abandoning the dream of their parents and grandparents and great-grandparents before them, often out of financial necessity. But renting isn’t just a matter of necessity these days. It’s become almost posh.

While paying to borrow décor, clothing and offices is nothing new, the options have grown substantially in recent years. Now, one can fill a temporary home with rented coffee tables and sofas from Crate & Barrel and West Elm, and refresh a wardrobe with rented outfits from clothing lines like Theory and Vince or mall chains like Loft and Express. Some of those garments can even be returned to special drop boxes at WeWork, where their short-term wearers might also rent office space.

It doesn’t end there: Fancy camping tents, Vitamix blenders, Dyson vacuums and Oculus Rifts are all up for lease too. Some would say we’re living in the Gilded Age of renting.

“We were raised to save and invest and buy a home and do all of these things,” said Miki Reynolds, 38, who pays a monthly fee for much of what she uses in her day-to-day life in Los Angeles. “But my mentality to currently rent — it’s not YOLO. It’s more living in the present as much as planning for the future because I feel like nothing is guaranteed.”

Reynolds, the executive director of a nonprofit that provides resources like office access and mentoring to entrepreneurs, rents both her downtown apartment and her coworking space. She regularly swaps out high-end clothing and accessories through a subscription to Rent the Runway. She also pays a monthly fee to a furniture startup called Fernish for a rental bed and floor lamp, as well as a borrowed coffee table and sofa. 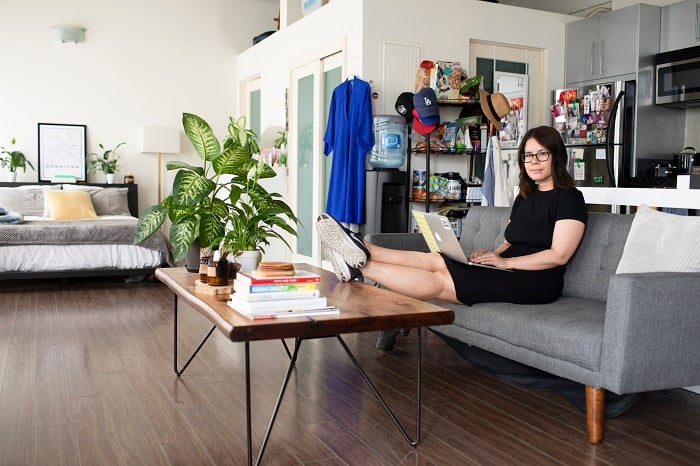 It’s easy and flexible to live this way, Reynolds said. The coworking space removes the administrative annoyances of running an office. She feels like she’s getting a deal on trendy furniture and clothing without being stuck with any of it. And she likes that she could pick up and move if she wanted, no moving trucks required.  The point of ownership, Reynolds said, is not to own at all, but rather “to experience the thing.” 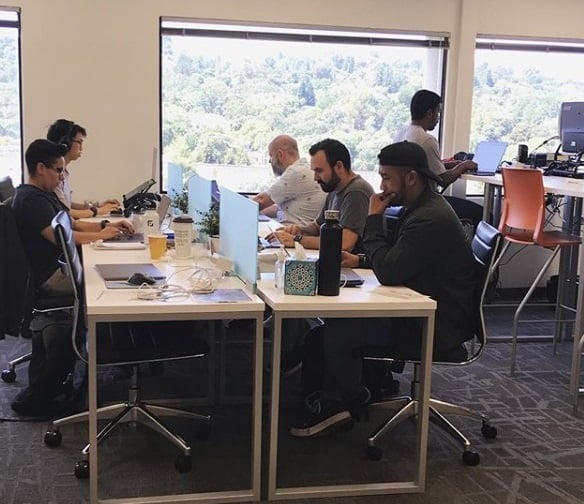 Coworking spaces are well-equipped with everything needed to run a business within a social/entrepreneurial environment. Memberships plans are flexible and more affordable compared to traditional office rentals.

It’s fitting that these options are resonating with a set of young, college-educated professionals roughly a decade after the Great Recession, which continues to shape notions of prosperity in the United States. Homeownership remains around a three-decade low for Americans in their 20s and 30s. That’s particularly evident in cities, where many can’t afford to buy. Yet some actually prefer the flexibility of renting as they explore jobs, neighborhoods and relationships.

The items that are being offered for temporary ownership to this cohort are a far cry from the Rent-A-Centers of the world, which target cash-strapped consumers who often lack access to credit. Fernish, for example, is geared toward young people whose design sense comes straight from Instagram, Pinterest and West Elm’s catalog. The company, founded in 2017, trades in imitation Eames shell chairs, midcentury-style wooden dressers and art deco-inspired bar carts, offering brands like Crate & Barrel and more boutique names like Campaign.

“They don’t necessarily want to commit, but they have disposable income and they want nice brands and want nice furniture and they appreciate good design,” Neela Montgomery, Crate & Barrel’s chief executive, said at a conference in March of this cohort of clientele. “We want those customers to appreciate CB2 and Crate at the earliest age.”

The co-founders of Fernish created the company for college-educated urban professionals like themselves, who were bouncing around between cities and apartments, jobs and graduate schools, and either throwing out cheap furniture or wasting time and money on temporary pieces in the process.

Customers can subscribe to furniture for three to 12 months. (Sofas can cost around $50 per month; dressers, around $40.) The company delivers, removes and deep cleans items between uses.

Lili Morton, 36, who recently moved to Seattle from New York, and managed to fit all her belongings into a rental car that she drove across the country, now rents some Fernish furniture. She works for a subscription clothing startup called Armoire out of a women’s coworking space called the Riveter.

“I want nice things, but I’m also not going to drop thousands of dollars all at once on a bunch of things when I don’t know in a year if I’m going to be in the same place,” Morton said.

Accordingly, many of her purchases revolve around self-improvement rather than material consumption. “I’m going to get a facial or a massage or get my hair blown out,” she said, “things that make me feel good and happy, rather than some impulse purchase that makes you feel good for a bit but maybe you get tired of it.”

From “Shopaholic” to Never Shopping

It’s a stark contrast to the retail therapy portrayed in the once-popular book and 2009 movie “Confessions of a Shopaholic,” in which the main character’s unhealthy yet entertaining obsession with expensive clothes, bags and stilettos drove her into a mountain of debt.

“We used to display wealth via what we purchased and there were a lot of kind of pop culture signifiers of displaying wealth,” said Jennifer Hyman, Rent the Runway’s chief executive. “The recession accelerated it, but I think there’s a value that’s been placed on intelligence and being smart about how you spend your money and that has also coincided with the rise of the sharing economy.”

Rent the Runway, which announced a $1 billion valuation in March, began in 2009 as a rental service for high-end formal dresses and has since introduced subscriptions for everyday wardrobe items. The company expanded into children’s clothing this year and plans to introduce pillows and throws from West Elm this summer.

The company has long had competitors like Le Tote, but more recently, established clothing brands and mall retailers have introduced their own monthly rental services and are advertising them on Instagram. Now, consumers can sign up for clothing subscriptions with Vince, Rebecca Taylor, American Eagle, Express and Ann Taylor and soon, Urban Outfitters.

Here’s generally how these businesses work: Users pay a monthly fee (about $50 for American Eagle Style Drop and $160 for Rent the Runway Unlimited) to borrow several garments at a time, often for as long as they want. They are mailed with prepaid shipping labels, so it’s easy to return them after wear; users can choose new items to rent once the returns are processed. If there’s anything they want to keep, they can often buy it at a discount.

Behind the scenes of many of these rental services is a startup called CaaStle, which has centralized the inventory of many of the labels and handles cleaning, customer service and delivery logistics. The retailers, in exchange, pay CaaStle a per-subscriber fee.

Christine Hunsicker, the founder of CaaStle, said that clothing-rental subscribers are typically 28- to 45-year-olds consumers with jobs and average annual household incomes between $50,000 to $150,000.

“When I was growing up, ownership was the sign of being an adult,” she said. Now, everything’s changed.

The underpinnings of the rental renaissance are part financial, part ideological.

Rent the Runway succeeded at that, and Hyman said the company has seen a further “viral” effect since opening drop-off locations in subscribers’ workplaces, including a network of WeWork locations. Each location is outfitted with a scanner, so subscribers can order new merchandise as soon as they deposit their last rental. The drop-off box at Goldman Sachs in Manhattan has prompted requests for similar boxes at fashionable companies like Condé Nast.

Environmental sustainability is mentioned by companies and consumers alike when they tout these services, but many customers view that as a perk rather than a driving force. Even when REI, the outdoor equipment retailer, surveyed its current and potential customers about rentals, their top motivators were to try new regular and seasonal activities without committing to purchases. Environmental impact ranked sixth on the list of motivations.

Eric Artz, the company’s chief executive officer, said in an interview that REI is heavily expanding rentals at stores this year and that the chain is prepared for “circular economy” products — like borrowed and used wares — to potentially make up the majority of customer purchases in five to 10 years.

Looking to rent an office or coworking space?  Find a Pacific Workplaces location near you.