The Suburban Office Park, an Aging Relic, Seeks a Comeback

Article below as seen on the New York Times
Author:  Amanda Abrams

When Research Triangle Park in North Carolina opened in 1959, its bucolic setting was considered a major selling point. With office buildings hidden behind grassy meadows and swaths of pine forest, the quiet development was viewed as a perfect spot for the thinkers who went to work at companies like IBM and RTI International.

But tastes have changed, and in an effort to keep up, Research Triangle Park — the country’s largest corporate research park — is finally changing as well.

Plans to redevelop a portion of the park, which have been pending for eight years, are now moving forward. In a few years, Research Triangle Park, which lacks even a coffee shop within its 7,000 acres, will be home to restaurants, bars, shops and apartments. 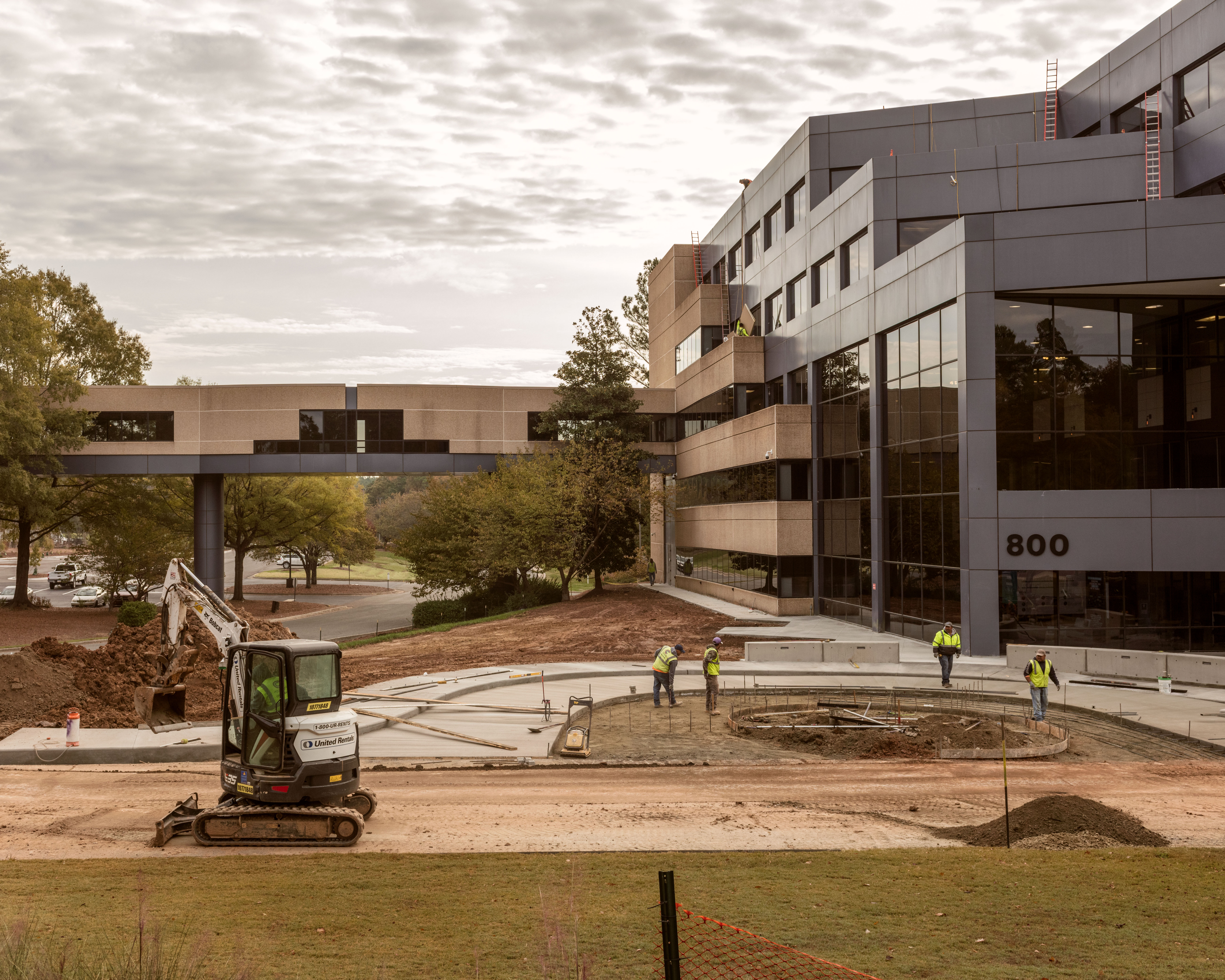 Renovations underway at the Research Triangle Park in North Carolina. The a 60-year-old development between Raleigh, Durham and Chapel Hill once lacked a coffee shop within its 7,000 acres; soon it will have restaurants, bars, shops and apartments. (Jeremy M. Lange/The New York Times)

The development’s challenges echo those of other suburban office parks around the country. Over the past decade, younger workers have come to favor urban environments that contain a variety of services and transportation options, a shift that has reduced the popularity of large, cloistered office settings.

“We’ve noticed a trend of a lot of office tenants moving to more urban, highly amenitized markets to attract talent,” said Jonathan Chambers, a vice president at Delta Associates, a real estate research firm in Washington. “They want to be closer to entertainment, transit, retail.”

At the same time, today’s tight labor market means that real estate can play a significant role in attracting and retaining quality talent. In response, developers are upgrading many suburban office campuses and adding amenities to make them more appealing. These office parks are on their way to a comeback, some analysts say.

Most were speculative, for-profit endeavors, but Research Triangle Park was a nonprofit initiative spearheaded by civic leaders. It was an attempt to retain graduates from nearby colleges and advance North Carolina’s economy, and it became hugely successful: Amid its winding streets and anodyne landscaping, big information technology, pharmaceutical and biotech companies flourished.

Office parks spread across the country, reaching a peak in the 1990s. By 2015, with the urban-living trend in full swing, 14% to 22% of suburban office space in the United States was obsolete, according to a report from the real estate advisory firm Newmark Knight Frank. Many properties were old, drab or inconveniently situated, particularly compared with bustling downtowns.

That was the case with Research Triangle Park, which is named for its location between Raleigh, Durham and Chapel Hill, municipalities that have become increasingly dynamic and are a draw for young workers. With agreements that restricted development to 30% of the land and prohibited retail or housing, the park struggled to compete.

“The smaller companies that wanted urban services and density were moving out of the park and into an urban center,” said Ted Zoller, a professor of entrepreneurship at the University of North Carolina at Chapel Hill. And many bigger companies were not coming; the park lost out on several large projects, including expansion plans by Amazon and Apple.

Other big research and development parks have pivoted more quickly. The board of the country’s second-largest research park, in Huntsville, Alabama, recognized in the early 2000s that its employees needed better access to services and created a mixed-use commercial zone. The result, the Bridge Street Town Centre is thriving, and the park’s leaders are planning a second project that will add even more hotel, retail and office space.

At Research Triangle Park, big redevelopment initiatives have been slowed by planning, personnel and money issues. Instead, the Research Triangle Foundation, which manages the park, has been taking smaller steps toward change.

One example is Frontier RTP, a former IBM building that reopened in 2015 with free coworking space and has since expanded to three more buildings. Offering lower rates and smaller, flexible spaces that startups and young companies can use, Frontier RTP is now home to a third of the park’s 300 companies. 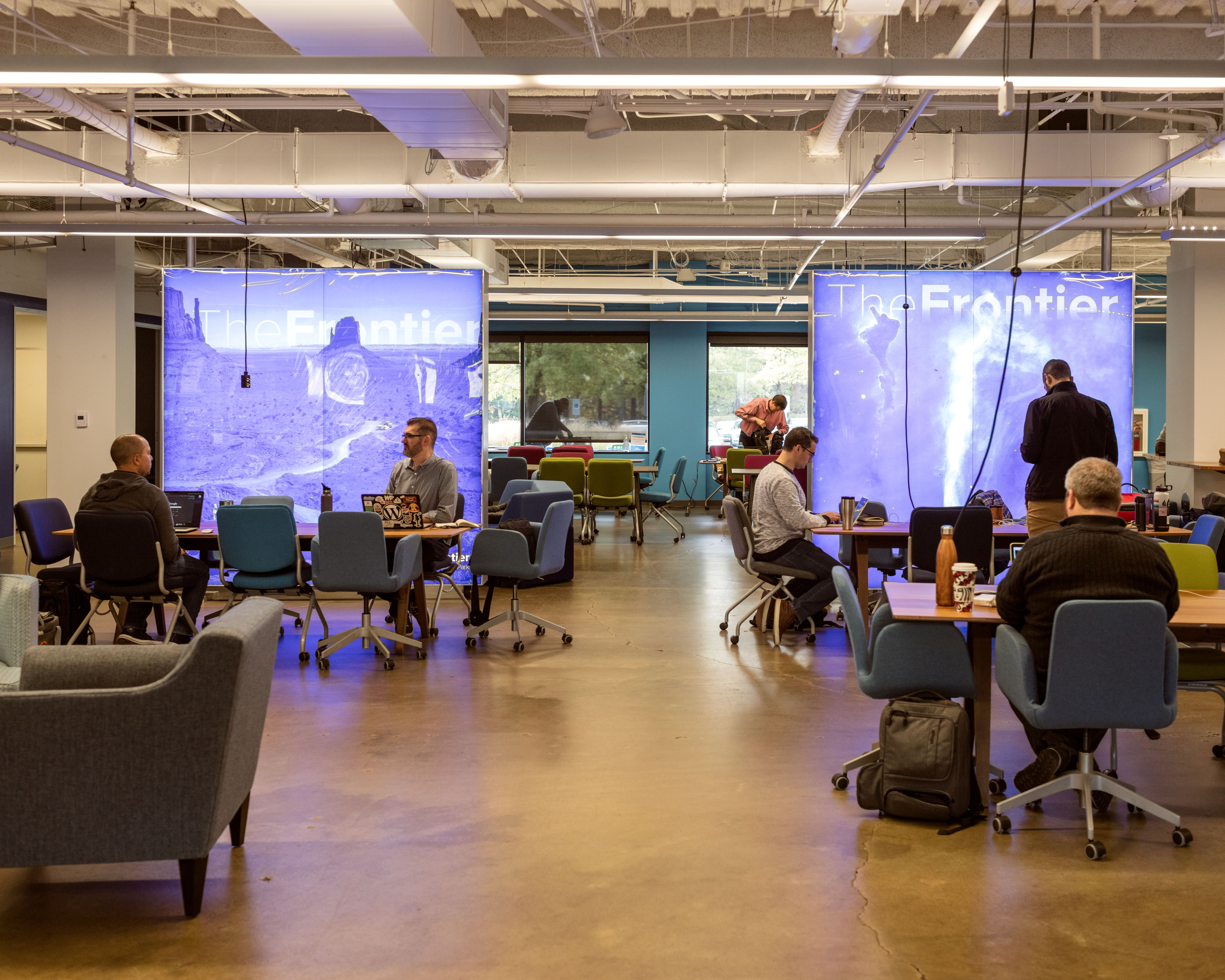 Frontier RTP, a co-working space for startups that now occupies four buildings in the Research Triangle Park in North Carolina, Nov. 7, 2019. The a 60-year-old development between Raleigh, Durham and Chapel Hill once lacked even a coffee shop within its 7,000 acres; soon it will be home to restaurants, bars, shops and apartments. (Jeremy M. Lange/The New York Times)

And in August, Research Triangle Park broke ground on the Boxyard RTP, a $7 million project that will turn repurposed shipping containers into a food and drink spot.

But the big project is yet to come. The park’s zoning ordinances and regulations have been amended, and next year, the foundation will break ground on a $1.13 billion mixed-use development, Hub RTP.

Willard Retail will build 130,000 square feet of retail, with an eye to driving weekend and evening traffic to the site. The residential developer MAA is slated to construct 450 units of housing. Phase 1 is estimated to be done in mid-2022.

Eventually, the 100-acre Hub RTP will also include hotel and conference facilities, as well as more housing and office space. The end result should be a live-work-play area intended to appeal to workers.

“It’s a rebranding,” said Scott Levitan, chief executive of the Research Triangle Foundation. “It needs to be rebuilt and re-visioned as a real town center.”

With that addition, he thinks Research Triangle Park will appeal to employers that are interested in “a more affordable market where their talent can live, and with amenities that are equivalent to an urban environment,” he said.

Many companies are willing to pay for high-quality office space — even in the suburbs.  The demand is greater in areas where the unemployment rate is particularly low, said Barry DiRaimondo, chief executive of the real estate firm SteelWave.

“The pool of labor is working at your competitor,” he said. “It’s almost like an arms race. You’re trying to create an environment people can’t get elsewhere.”

Analysts caution that the suburban office market is specific to each region. In many West Coast areas, for example, just about every submarket is doing well, whether urban or suburban. That means a former single-tenant office park like Rosewood Commons in the Bay Area can do very well, particularly if it’s near public transit. But even Rosewood added a few amenities, like a bike-share program, a renovated cafeteria and a bocce court.

Across the country, the suburban office vacancy rate is the lowest it has been since 2001, according to recent CBRE data

Even in the Midwest, employers are often willing to invest in attractive suburban offices, the real estate firm JLL said in a recent report.

In Des Moines, Iowa, the R&R Realty Group recently opened the Westfield Campus, a large multitenant complex with a rooftop patio, a coffee bar, a multipurpose event space and an amphitheater. At almost $23 per square foot, it is one of the most expensive properties on the market there, but Mark Rupprecht, R&R’s president, said companies were willing to pay it.

“The question kept coming up: What can I do to differentiate my business and myself?” he said, adding that building a new suburban office campus did not feel risky. “Nothing’s guaranteed, but the suburban office market isn’t dead.”

After all, with downtowns everywhere becoming increasingly expensive, workers are starting to look farther afield, to areas with affordable homes and good schools.

“The millennial workforce is getting older and finding suburbs more appealing than they did 10 years ago,” said Dustin C. Read, a professor at Virginia Tech and the author of a recent NAIOP report on the evolution of suburban office parks.

“They do need an environment that makes them happy,” he said. “But the fundamental characteristics that have always made the suburbs attractive continue to do so.”

Looking for a workspace community in the suburbs?  Find a suburban coworking location near you.