Women in Tech (and Coworking) – A Conversation with Five Tech Professionals

Coworking spaces around the world are full of women tech professionals.

At a recent Women in Tech event at NextSpace Santa Cruz, five women—Kathleen Tuite, software engineer and creator of Feminist Hacker Barbie; Leila Takayama, expert in human-robot interaction; Sara Isenberg, founder of Santa Cruz Tech Beat; Sue Dayton, a UX/product design consultant; and Tiffany Jones, Producer/Digital Product Manager at Design by Cosmic—shared their insights about the state of the tech ecosystem, what women bring to the landscape, the biggest challenges, and what they’d like to see.

Several of the women are members of NextSpace Coworking Santa Cruz, and find the coworking environment to benefit their work and personal wellness—including working closer to home and family, avoiding long commutes, and engaging in a supportive and creative community.

As Tuite explains, “Working at a coworking space like NextSpace, especially while working in a male dominated tech field, lets me be surrounded by—and in contact with—lots of great women every day. It’s just a different kind of energy that I’m grateful to be exposed to. And on days when some sexist BS happens, these women are there to support me, and I’m there to support them.” 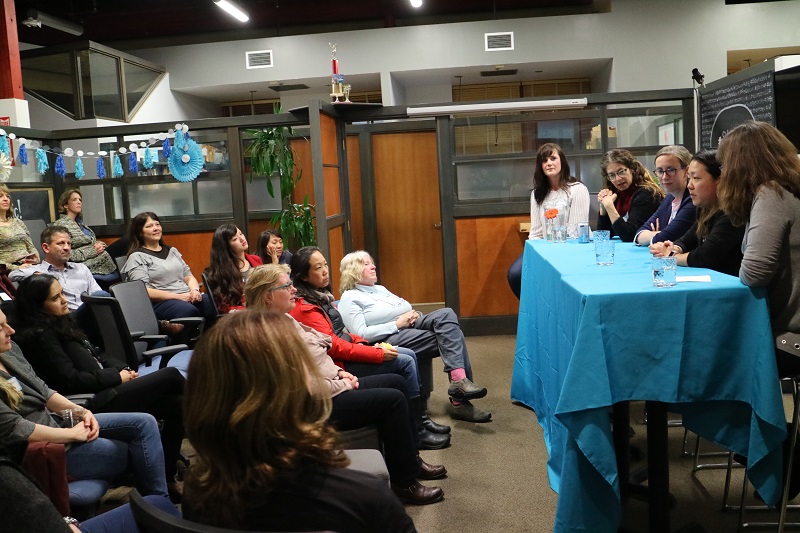 I connected with the women about the state—and future—of women in tech. Here are the highlights:

Cat Johnson: What do women bring to the tech landscape that we haven’t seen enough of?

Sara Isenberg: Women in tech bring camaraderie/comradery, affirmation, and a general sense of support rather than competition to the tech landscape. I’m not saying that some men don’t provide this, but working with women enhances this.

Sue Dayton: Diversity in thought. There is a tendency to want to hire, work, and socialize with people just like you. But bringing in more diversity to the tech world and challenging your biases actually creates better products.

Kathleen Tuite: Diverse viewpoints, experiences, insights into nuances of problems that technology is trying to solve, and ideas for tackling those problems. This diversity of ideas doesn’t just come from women; the tech landscape needs to make space for people of all genders, races, socioeconomic backgrounds, skill backgrounds, and life experiences, to contribute to building technology that works for them.

Leila Takayama: We bring the perspectives of half of the world’s population that has too often been missing from the design and development of new technologies.

Tiffany Jones: Women bring diversity to the tech landscape, which is something that we haven’t seen enough of. In my opinion, the more diversity there is in any group—whether it’s gender or race or one’s upbringing or education—the better ideas and outcomes that group will have. We all bring unique strengths and ways of looking at situations to the table, and it’s important to be able to tap into those differences in order to solve challenging problems.

What are you excited about when looking at the future of women in tech?

SI: I’m optimistic that everything we’ve been doing for the last 30+ years to make strides for women in STEM professions will make it easier for the next generation.

SD: I’m looking forward to an environment where women engineers and designers are seen in equal numbers to the men in those roles. Where women are fully included all the way up to the C-Suite, instead of the current step decline in percentages.

KT: Women supporting other women. People in general respecting, valuing, and empathizing with all people involved in creating, powering, and using technology at all levels. People standing up for people being marginalized by technology.

LT: In the near term, I am excited about seeing more how teams can perform even better with women involved in the design and development of new tech. Yes, this change will make everyone uncomfortable. Yes, it will take more effort for individual team members to learn how to really listen to one another. And that discomfort and effort will totally be worth it because we will be making better performing, more inclusive tech products and services.

In the longer run, I am looking forward to a future where the inclusion of women in tech is a given, not a thing that needs to be remarked upon. I want a future where we can just talk about “people in tech” and it will be obvious that women are part of that community, not an oddity.

TJ: I’m excited to see that there are more young girls and women who are being encouraged to look at a job in technology as a viable career option for them.

SI: I find it challenging — actually frustrating — that we’re still working on some of the same 1980s and 1990s issues that we’ve been trying to improve for decades. Do we really still need to explain how to include women’s representation and inclusion in STEM hiring, work teams, management, speaker panels, etc? Apparently, we do!

SD: Finding teams where diversity is embraced, and not just an HR push.

KT: Having to put up with extra crap (microaggressions, harassment, navigating spaces and systems that aren’t welcoming to us) while trying to do our technical jobs.

LT: Women still face implicit bias in the workplace. Just because people are aware that implicit bias exists, that does not necessarily mean that they are immune to it. Overcoming implicit bias requires action (e.g., taking the time to blank out names on resumes and to avoid using gendered pronouns when reviewing those resumes), not merely awareness. A major challenge that women and minority groups face in tech right now is turning awareness into concrete actions that fight against our many implicit biases.

TJ: One of the biggest challenges that women in tech face right now is fitting in. It’s important to see other women on your team, and to know that you won’t be the only female on a team, especially in a tech role. It’s also important for women to have a role model or a mentor that can help them navigate the sometimes tricky waters of being a woman in tech.

What would you like to see in the next year or two for women in tech?

SI: I’d love to see more men in positions of leadership step-up when it comes to inclusion, and show in their actions—not just their words—that we’re not in this by ourselves. On the other hand, it’s great fun to work on all-women teams and projects.

KT: For more women to find or create working environments where they are supported and encouraged, and get to collaborate with other women. I want more women to have chances to experience not being the “only” or one of a few women in their group, and to see what we are capable of when we are allowed to thrive.

LT: I would like to see more women standing up for other women in tech. Mentorship and advocacy are great and work well at the small scale, where it’s possible to build meaningful professional relationships. However, there are not enough female leaders in tech to be able to support all of the women who are coming into tech in the next two years. One of the best ways I’ve seen (and experienced) women looking out for each other is through everyday interactions, helping each other out as peers and colleagues, not just as role models and recommenders.

TJ: I would love to see more events and opportunities for women to get together and see each other, know they’re not alone, learn from each other, and help one another.

Thanks to Sara, Sue, Kathleen, Leila and Tiffany for sharing their thoughts and insights about this important topic. There is lots of room for improvement around equity, diversity and inclusion, in local tech ecosystems and around the world.

by Cat Johnson, a content strategist, storyteller and coworker at NextSpace Santa Cruz