Life After WeWork – Now What?

This article explores the after-effects of WeWork’s colossal pre-IPO collapse and its impact on landlords, investors, coworking operators, and WeWork SMBs and Enterprise members. 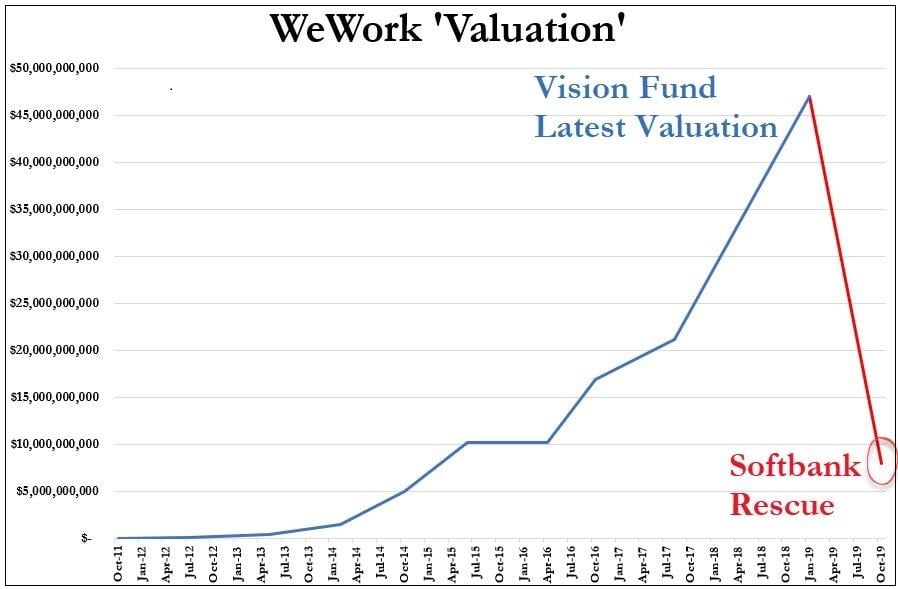 The 2019 collapse of WeWork has been well documented. The reader can go to the end of the article for a summary of the chronology of events and key metrics.

WeWork’s original membership growth was based on freelancers and very small businesses, whose demand for coworking space was especially strong in post Great Recession years. These customers valued the extreme flexibility and low price of their membership. Millennials, more so than other age groups, appreciate the communal aspects of the WeWork workplace that represents a familiar transition from college life. 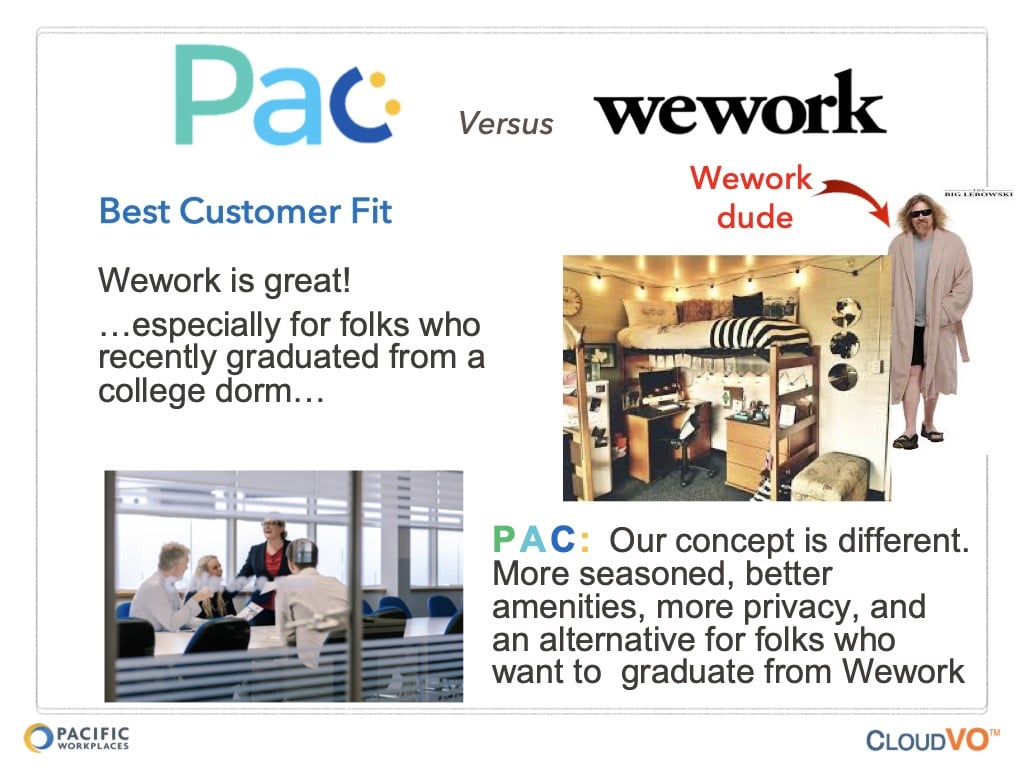 This slide from an internal training exercise at WeWork’s competitor Pacific Workplaces pokes a little fun at WeWork, while differentiating the positioning of each company in the marketplace.

In the pursuit of continuous exponential growth to justify steep increases in valuation over its various equity rounds, WeWork maximized occupancy with a very aggressive pricing policy. That strategy can no longer work as WeWork is now forced to quickly reach profitability, a formidable task, given the staggering amount of losses. Cutting down on overhead and abandoning past dubious investments outside of its core business won’t be sufficient. WeWork will need to increase prices to market levels or shed some of their spaces. They will have no other choice than to stay with their current design and maintain a crowded workspace, which has proven to work well for a segment of the demand, particularly the younger freelancers and early startups, but not as well for more mature companies and users who seek a bit more privacy in their workplace.

Although WeWork claims 90% occupancy, our own experience visiting WeWork locations in December 2019 suggested a drop in occupancy in West Coast markets for the non-Enterprise spaces. Since we are not aware of any similar trend with WeWork competitors, we believe that this apparent drop in occupancy is mostly due to the negative press that surrounded the IPO failure. This in turn makes it difficult to raise membership prices in the short-term, but WeWork members should expect some significant price increases in the next couple of years in locations that WeWork may not be forced to close down.

WeWork’s strategy of subsidized prices in an attempt to lure big corporate names and show exponential growth before their planned IPO has been especially visible in their HQ-as-a-Service approach with large Enterprise accounts. Recently, a VP of corporate real estate at one of the largest High Tech companies in Silicon Valley confided with our CEO that he did some very large flexible term deals with WeWork, only because the price was subsidized. In his words, “WeWork brought us no other value whatsoever. There is nothing they did that we could not have done ourselves but it did make sense for us to take advantage of their willingness to operate the project at a loss.”

That’s a pretty bleak assessment of WeWork’s capabilities with their technology, design, and construction capabilities, hailed by the company as a source of operating efficiencies. WeWork will have to assess whether or not they also need to cancel these programs.  The subsidized occupancy approach is no longer an option for WeWork.  That means they will be forced to raise prices on Enterprise customers at renewal (typically after a 3-year term) with no obvious way to document a value-add in their intermediation work between Landlords and Enterprise accounts, with respect to large flexible spaces.

Because that flex corporate space will be the first one to go if the economy softens, or when the Enterprise customer moves its workforce to a more permanent place, we think that this segment of their business will be the most exposed to shocks in the economic environment. Unlike the SMB business that is strong when the economy grows, and possibly even stronger in a recession when businesses downsize, HQ-as-a-Service spaces may have more difficulties to find replacement tenants at lease expiration.

What is strange to us is that WeWork’s new stated strategy is to focus more on Enterprise accounts moving forward. Their current infrastructure, concentrated in very large locations in mega-cities, is not well positioned to win an important segment of this business, the one that supports mobility and distributed workforces, which is also the segment that will likely show more growth and more stability, regardless of the economic environment.

Today, WeWork is present in only 123 cities at the time of this writing, half of them in the U.S. This compares unfavorably with Regus and its presence in about 900 cities, and with CloudVO, with a presence in 370 cities. Regus and CloudVO may be the only two credible players to support mobility and distributed workforces today for Enterprise customers.

The segment of the Enterprise business that we foresee continuing to show strong demand is with satellite offices and small touchdown office spaces in suburban locations and small cities around the country. WeWork’s current infrastructure, concentrated in very large locations in mega-cities (~7 locations per city on average, compared to ~2 locations per city for CloudVO), is not well positioned to win that part of the business that requires a wider geographic coverage.

Landlords with a large WeWork occupancy can be rightfully concerned about WeWork’s ability to meet current rent obligation in many locations. What they should not be too concerned about is the demand for coworking. What happened to WeWork, simply due to blatant mismanagement, will have no impact on the demand for coworking services that reflect a new way of work. The powerful underlying behavioral and economic forces behind the demand for coworking will be unaffected by the collapse of one provider, even as negative a headline grabber as WeWork has been. Another way to say this is that the highest and best use of most WeWork spaces that a landlord may get back sooner than expected, is likely going to be a coworking operation. If WeWork is unable to get their act together, landlords will need to look for a replacement operator, albeit a better managed one. With a new management team, WeWork could remain the best option in a lease restructuring, but other well managed operators like Novel or Pacific Workplaces may be worth considering.

Impact on other coworking operators

The misfortune of WeWork is globally good news for well managed coworking operators. WeWork will be forced to raise prices in many locations, or shed space, and in many cases do both to attain profitability. The collapse of a poorly managed operator does not change the dynamic of the coworking demand which continues to increase rapidly. Other operators will step in to fill the void while WeWork struggles with its demons and, hopefully, eventually restores its financial health.

Landlords who were fixated on attracting WeWork in their commercial real estate development will now need to consider other operators as they increasingly realize that the demand for coworking space is a trend that will not go away.

In that context, operators that can justify a long track record of growth and profitability are becoming the most credible options for many landlords who are afraid to fall for the smoke and mirrors that may have seduced them in the recent past. There is now a premium for track record and profitability.

For example, Pacific Workplaces has a track record of more than 15 years of profitability in the coworking space, navigating successfully through two recessions. This today becomes a key differentiator that has attracted considerable interest from landlords in the Northern California market. Joint Ventures and Management contracts seem to have become more popular, as landlords want to retain control of their TI investments.

For newer operators that may only have a short track record, selling their concept to landlords and investors solely on their vision of the workplace is becoming more difficult. However, they can become more credible if they attach themselves to larger networks. There is strength in numbers. Brands will continue to consolidate supply and grow. Being associated with a fast growing brand will inspire more confidence with landlords and users alike. In this context, an affiliation with a network like CloudVO or a franchise like Office Evolution, VentureX, or YourOffice can only help.

Finally, coworking operators that compete with WeWork should aggressively pursue growing a Virtual Office business, which provides a less expensive officing alternative to price sensitive customers than the 40 square foot offices WeWork is able to sell at a relatively high price.

For more information specific to Landlords, please visit our Landlord-Partners page.  For general information or questions regarding the key metrics referenced in this article, feel free to contact us.